You can quote all the new plans with Maternity here

We just had a major taste of what is coming with the full Health Reform bill. On July 1st, 2012, A California law that mandates maternity coverage on all plans went into effect. This is a big change as we have lost most of our maternity plans since the Health Reform bill was passed. We'll look at the pro's and con's of this legislation and how it impacts the individual California health insurance market. 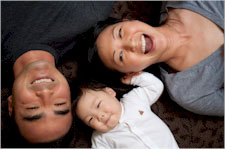 The law is actually another example of California front-running national health reform changes.

There's a little know law called Knox Keene which was passed in 1975. It required that all individual health plans on the California market cover maternity. There are a few plans that are not affected by it such as temporary health, hospital plans, Medicare, and a few other specific types but the bulk of plans available will now cover maternity. We view this with mixed blessings. We used to have a few dozen plans that covered maternity just a two years ago.

When health reform was passed, most of them were closed and the remaining plans became very expensive.

By expensive, we mean almost double what non-maternity plans were costing. This posed quite a problem for a female in her 20's or 30's (and 40's) in terms of choosing a plan. You really needed a crystal ball that foretold the future or you were stuck with a much more expensive plan.

The new bill is interesting in that it applies to all plans even the so-called "Grandfathered" plans from before 3/23/2010. Most of the other mandated benefits such as preventative only applied to new plans going forward but the origin of this maternity bill is not really a Health Reform specific mandate so much as a California law being re-interpreted. So what can we expect from the implementation of this bill?

All plans now available on the standard Individual health insurance market cover maternity as a core benefit (similar to other main benefits). It's that simple. There may be some preventative benefits associated with maternity (well baby, neo natal, etc) that now fall under the preventative benefit at 100% coverage. Of course, there will be a cost impact to this mandate. It will fall more heavily on those in the child-baring age...let's say age 19-39. This age band will see the biggest impact since maternity is a very expensive medical expense (ranging from low of $10K up to $100's of thousands).

We'll likely see these rate increases over the next two years although everything will reshuffle Jan 1st, 2014 so it might be tough to tell what's actually driving the rate increases with guaranteed issue coming onto the market.

The maternity plans were roughly double those with similar benefits but without maternity so we're guessing that we'll see a doubling of premium for all plans especially since so many of the popular plans were priced based on a pre-maternity era. Many of those plans have already been closed. Our concern of course is whether people will be able to afford California health insurance as it is. Most of the health reform bill was around getting people coverage as opposed to affordability regardless of what is said politically. We'll have to watch how this unfolds but for now, all (or most) California individual health insurance plans cover maternity. Group health plans already covered maternity so that's not an issue.

You can run your Covered California Plan Quote here to view rates and plans side by side from the major carriers...Free.